Choices of miso paste for the miso ramen noodle soup defines a great deal of its character and flavor. Miso pastes are a traditional Japanese seasoning that can be produced by fermenting soybeans with salt & the fungus Aspergillus oryzae (also known in Japanese as kōjikin 麹菌?), & sometimes rice, barley, or other ingredients. There are many variations within the themes of red, white, & mixed that include regional variations, such as Shinshū miso or Sendai miso.

More than 80% of Japan’s total annual production of miso goes into miso soup, and 75% of all Japanese consume miso soup at least once a day

Heat the oil in a large stockpot over medium heat. Add the chili & the garlic. Cook about 1 minute until fragrant. Add the miso paste & cook another 30 seconds until the paste starts to coat the inside of the pot. Add the water, mushrooms, spinach & scallions.

Bring to a slow simmer & cook 2 to 3 minutes, until the mushrooms are cooked through & the spinach has wilted. Serve immediately. 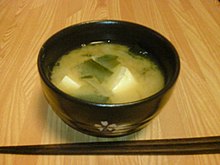 Miso Soup is a traditional Japanese soup consisting of a stock called dashi into which is mixed softened Miso paste. Although the suspension of Miso paste into dashi is the only characteristic that actually defines Miso soup, many other ingredients are added depending on regional and seasonal recipes, and personal preference.